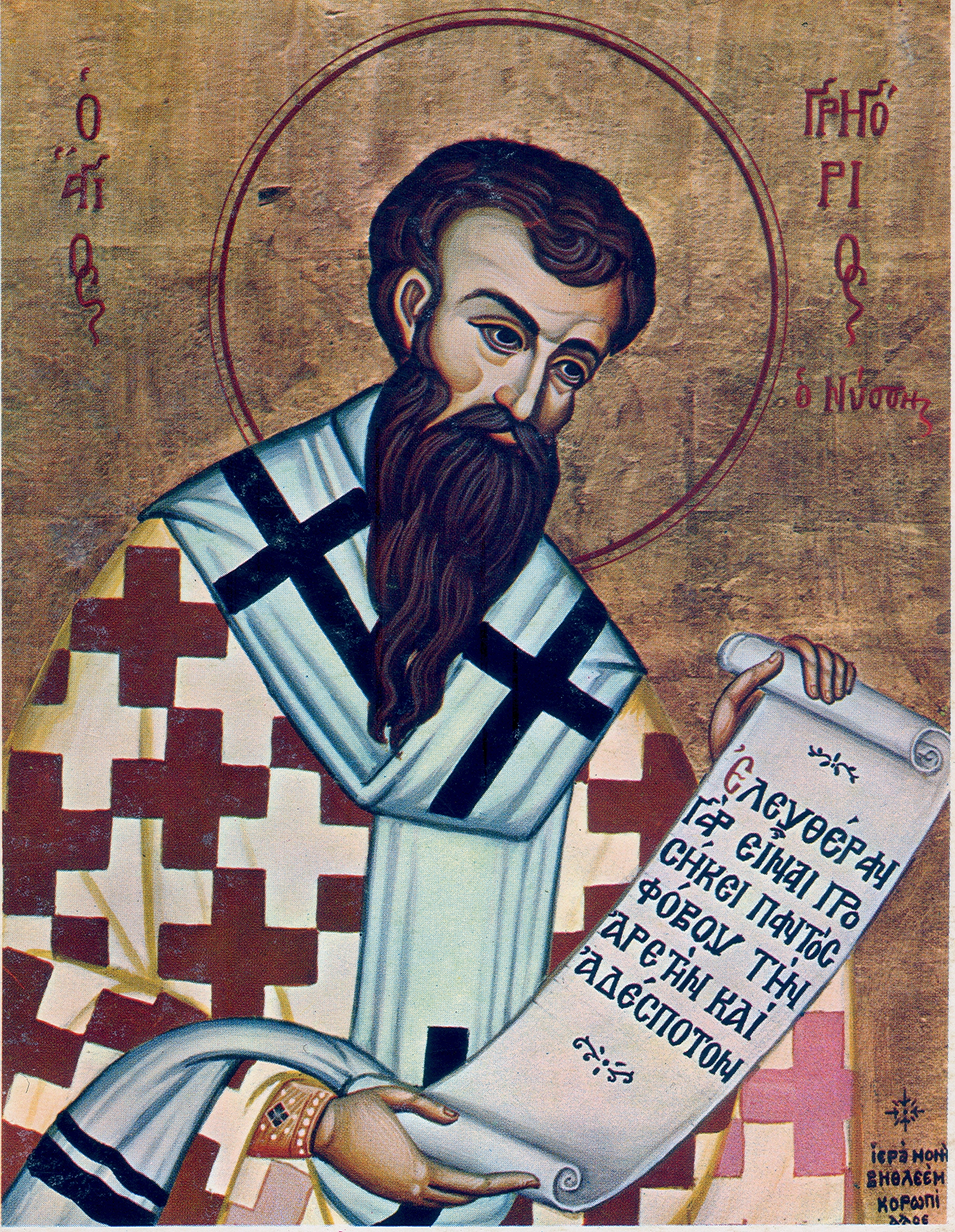 The Life of St Gregory of Nyssa

St. Gregory was born about 335 A.D. in the region of Cappadocia (in modern day Turkey). He was the third son among ten children, and belonged to a very pious and illustrious Christian family. In fact, his grandmother, Macrina; his parents, Basil and Emelia; and his brothers and sister, Basil the Great, Peter of Sebaste, and Macrina, have all been recognized as saints of the Church.

In his early life, Gregory was a highly unlikely prospect of one day becoming a leading figure in the Church and a famous saint. Gregory had no interest in devoting his life to the service of the Lord as did his brothers and sister, but instead chose to follow his father's career as a teacher.

Gregory's life, however, underwent a dramatic change. When he was twenty years old, some of the relics of the Forty Martyrs of Sebaste were brought to a chapel on the family estate. During an all-night vigil service at the chapel, in honor of the Forty Martyrs, something dramatic occurred. Gregory, called to participate by his family, half-heartedly and with indifference attended the divine service. Wearied by the long prayers, Gregory left the Church during one of the sermons and went to sleep. During his sleep he had a vivid dream of trying to enter the Church, but the Forty Martyrs would not permit him. It was only with the help of one of them that he managed to escape punishment. This frightening dream left a lasting impression on Gregory. He soon left his worldly studies, and devoted himself to the study of the Scriptures and things of God.

Gregory's change of heart did not last long, and he soon abandoned his life of dedication to the Lord, and resumed his secular career as a teacher. However, under the influence of his devout family and friends, he returned to the Church and entered a monastery founded by his brother Basil.

In the year 372, St. Basil consecrated his brother Gregory as bishop of the small city of Nyssa. Unfortunately, Gregory had little peace in his ministry at Nyssa, for soon heretical clergymen rose up to oppose his work. Charges were made that Gregory was not validly ordained and that he had embezzled Church funds. He was arrested, taken away by a band of soldiers, deposed as bishop, and sent into exile. After the death of the Arian Emperor Valens in 378, Gregory was allowed to return home and was restored to his office. Gregory's joy shortly turned to sorrow with the death of his beloved brother and mentor, Basil, and then the death of his sister, Macrina.

With the death of St. Basil, Gregory stepped in to take the place of his brother as the foremost defender of the Orthodox Faith from various rampant heresies. St. Gregory became famous throughout the Empire for the spiritual depth of his sermons and writings. He is considered one of the most deep and profound writers of the Christian Faith, and stressed the importance of moderation in life. Furthermore, he played an important role at the Second Ecumenical Council which was convened at Constantinople in 381.

Little is known of the final years of St. Gregory's life. The last record we have of him is his presence at a Synod in Constantinople in 394. He died, probably in 395, and is commemorated each year on January 23 (Old/Julian Calendar) or January 10 (New Calendar). [Note: Many years after his death, he was accused of being an Origenist (a supporter of the doctrine called the apokatastasis, or a heresy identified with the early Christian writer Origen). However, he was later vindicated by the Church, and was honored at the Seventh Ecumenical Council in 787 with the title, "Father of the Fathers".]

A Life To Model

Although our patron saint lived over 1,000 years ago, we see in his life many similarities that can be applied to our times as well. As followers of our Lord Jesus Christ, there is much in his life that can be model for our own lives. In the life of St. Gregory of Nyssa we see:

The Importance of a Christian family

St. Gregory undoubtedly became great in the eyes of the Lord through the influence of his grandmother, parents, brothers, and sister. We see how important it is to raise our children to love and serve Jesus, not only by taking them faithfully to church and church school, but by our word and example in the home.

The Struggle to Remain Faithful

St. Gregory, like all of us, was far from perfect. For periods in his life he had little interest in the things of God and the Church. But, with the help of his Christian family and friends (such as St. Gregory of the Theologian) he struggled to remain faithful to God. Each of us is engaged in a daily "unseen warfare" against Satan and his hosts, which seek to pull us away from Jesus and His salvation.

Trust in the Lord

Like all of us, St. Gregory endured much hardship and tragedy in his life. But like him, we too must trust in the Lord as we read in the Book of Psalms: "The Lord guides a man in the way he should go and protects those who please Him. If they fall, they will not stay down, because the Lord will help them up." (Psalm 37:23-24)

PRAY TO GOD FOR US!

In truth you were revealed to your flock as a rule of faith, an image of humility and a teacher of abstinence; your humility exalted you; your poverty enriched you. Hierarch Father Gregory entreat Christ our God that our souls may be saved!

You kept watch with the eyes of your soul, holy bishop, revealing yourself as a watchful pastor for the world. With the staff of your wisdom and your fervent intercession, you drove away all heretics like wolves. You preserved your flock free from harm, most wise Gregory.